Tanzanian President Samia Suluhu arrived in Kenya on Tuesday morning for a two-day state visit to Nairobi, her first since she took over the presidency following the death of John Pombe Magufuli in March.

Suluhu immediately headed to State House Nairobi for a meeting with President Uhuru Kenyatta. This is the first time a Tanzanian President is making a state visit to Kenya since October 2016.

A new chapter has been opened in the relationship between Kenya and Tanzania following the visit by the Head-of-State of the neighbouring country. 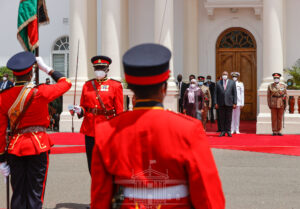 Suluhu said they agreed to improve ties in trade, infrastructure, transport, tourism, culture and security between the two countries. Photo/PSCU

Speaking at State House in Nairobi after holding private discussions with Suluhu, Uhuru said they even instructed senior government officials from the two countries to constantly engage each other to strengthen the ties. 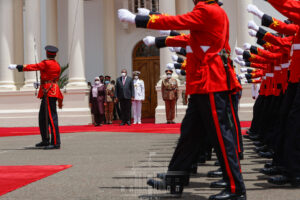 “We have instructed ministers to be meeting from time to time to resolve issues that cause problems for the relationship between the two countries. We want to make everything easy for the two nations,” he said.

She said the two countries need to improve ties as they share a long border, with Kenya being the fifth biggest investor in Tanzania, globally, and number one in the East Africa region. 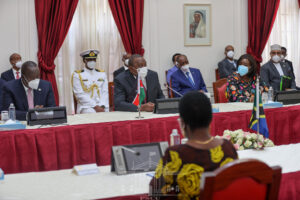 Suluhu said there are 513 huge Kenyan investments in Tanzania worth US$1.7 billion (Sh170 billion).

President Suluhu appreciated the reception Kenya accorded her saying it signified the importance of the visit. 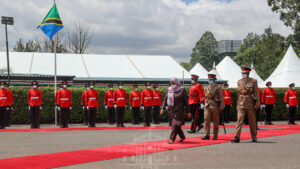 She said there are 30 Tanzanian companies in Kenya employing some 2,600 people. Photo/PSCU

Suluhu further announced that the two countries had agreed to cooperate in the fight against the Covid-19 pandemic.

“We want testing and clearance at the borders to be fast so as not to hinder trade,” she said.

Uhuru said that they touched on the construction of a gas pipeline that will run from Dar es Salaam in Tanzania to Mombasa. Photo/PSCU

“This will cut the cost of electricity in our country and will ensure that our industries have access to environmental-friendly electricity and energy,” Uhuru said. 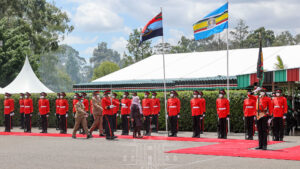 Uhuru and Suluhu touched on the construction of a gas pipeline that will run from Dar es Salaam in Tanzania to Mombasa. Photo/PSCU

Igathe deal that saw Sonko allowed to vie in Mombasa